I’m currently a member of a traffic safety committee in my neighbourhood. I joined this committee because I want to help make our streets safer. Since I joined the group, the committee has received dozens of complaints suggesting that speeding is a big problem and that the neighbourhood’s streets are not safe for our children to play in, or to cross the street. Even at lighted, controlled crosswalks, crossing is a hazardous activity.

The city of Calgary is currently debating whether to reduce the residential speed limit from 50 km/h to 30 km/h, in particular for streets that are not considered thoroughfares. As a result of these discussions however, the City’s traffic engineering staff seem to be washing their hands of any changes to address speeding concerns until after council make their decision one way or the other. The attitude isn’t that great either. The argument I’m always faced with when speaking about traffic safety to those in charge of it, is if there haven’t been any incidents, there isn’t a problem. What I don’t think they realize, is that incidents have likely been avoided up until now partly as a result of good luck, and mostly as a result of families not being comfortable using streets the way the residents would prefer to use them. In my experience, there may not have been many incidents, but there certainly have been a lot of close calls.

I don’t particularly feel we’re going to accomplish anything by reducing speed limits in our city, because if speeding is already an issue, lowering the speed limit won’t solve the problem. There is only one thing that can reduce speeding on our roads and that’s enforcement. But as we all know, with the exception of strategically placed (and quite obvious) photo radar camera vehicles and intersections, enforcement is practically non-existent. 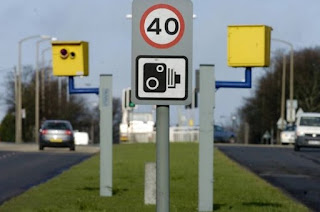 In the UK, they generally have two types of permanent speed enforcement using cameras. One type, commonly found in towns and cities in areas where speeding is an issue or safety is a concern (such as school zones), cameras are permanently installed and are triggered any time a speeding vehicle passes by. There are always signs warning that they are approaching a speed zone camera. The other type are found on the overpasses of motorways (highways). Most motorway cameras don’t record your speed, they record when you pass the camera. Cameras further down the road also record when you pass and a computer automatically calculates your average speed between those points. If your calculated average speed is above the speed limit, you get a ticket. Motorways can also have variable speed limits, so the calculation takes the temporarily reduced speed into account as well. There are 2,838 cameras in the UK. To be honest, the backlash against them is strong.

The UK also have something called Community Speed Watch. Volunteers in their own community spend some time each week monitoring speeds and noting license plates. Those identified as speeding are sent a warning letter and the police will take further action if the same vehicle is identified as speeding 3 times. Community Speed Watch is only permitted for speed limits of 40 mph (64 km/h) or below. Junior Speed Watch works in a similar way but involves school children.

In France, there are hundreds of unmarked police cars equipped with radar that can measure and record another vehicle’s speed while they roam around the roads and streets. So you never know when or where you might get caught. 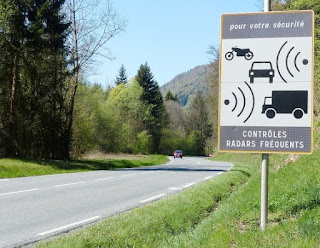 France is implementing very sophisticated speed cameras that are capable of seeing across eight lanes of traffic, and can monitor several vehicles at once. The cameras have the ability to take note of drivers or passengers who are not wearing seat belts, and detect drivers who are using their mobile phone on the road. They can also detect and record illegal passing, and dangerous driving practices such as tailgating, running a red light, and driving in a prohibited lane or area.

In Germany, they have speed cameras as well, and you do get a fine for being caught speeding. But the fine for not leaving the proper distance to the vehicle in front of you is even higher. In other words, you can get a big fine for tailgating on highways.

In Canada, I know that people in general have an attitude toward photo radar cameras that they are just a money generating device for police services. But I really do believe that speed limits in playground and school zones need to be enforced full time, and the only way I can see this being accomplished is with permanent speed cameras. I would like to see the Community Speed Watch concept tried here as well. That way, residents who perceive that speeding is a problem in their neighbourhood can monitor speed, note plate numbers and report them to police. Let the police deal with these drivers when 3 or more complaints have been registered against them.